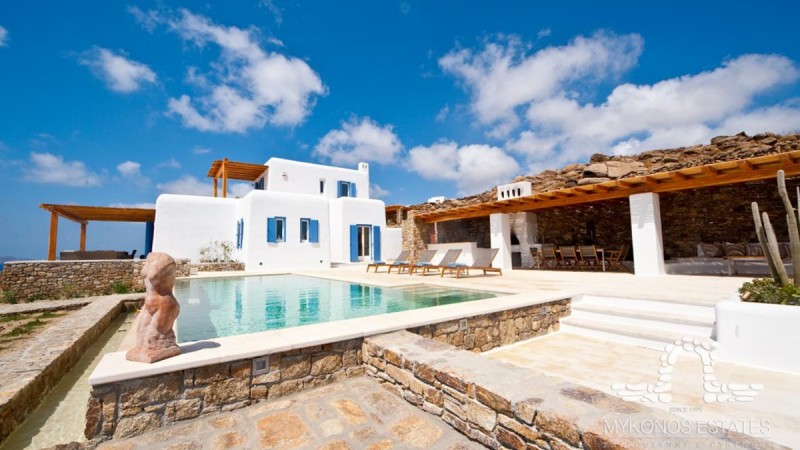 All the talk of a crisis in Greek may well have been overdone. For sure, 2015 was a year of great political uncertainty and economic instability in Greece, but islands such as Mykonos have remained relatively insulated from all of that. If anything, the instability in the rest of Greece has stirred interest in Mykonos, rather than act as a roadblock to foreign investors who’ve wanted to buy property here.

What makes Mykonos such an attractive overseas property destination?

Mykonos is perhaps the most popular of all Greek islands as an overseas property destination. That there was a crisis in Greece did have its effect, but not in a way that you would have thought. With vacation homes on the island available for half a million to 1 million Euros, we had a lot of people from Britain, France, Germany, Italy and the Middle East investing in properties here. Any island pad in Greece can get its owners a decent rental income.
Mykonos has always had an international jet-set appeal to it, with goes back to the days of the famed billionaire Ari Onassis, who had a mansion here. Some of the appeal helped the famed island escape from some of the fallout of Greece’s economic crisis. While it is true that prices in Mykonos have dropped since 2009, the fact is that sales have never really stopped – there are always people buying properties in Mykonos, no matter from which part of the world they are from.

Properties in Mykonos – What should you look for?
Prices of properties in Mykonos are not the same across the island. The west coast is perhaps the most desirable part of Mykonos which stunning beachfront villas that cost over $5 million. There’s a spectacular view of the sea to be had here, and the view during the sunset is quite picturesque as well.
There are smaller villas as well, that can be bought for $2.5 million or more. Most come with a swimming pool and have everything you would expect in a luxury villa. There are clusters of villas available as well, with a common outdoor space and shared swimming room – each of the villas in the cluster can be had for a song.
Indeed, today, prices have fallen by 40 percent than the levels they were at just before the start of the global housing crisis in 2008. The fall has been stopped to a certain extent over the last couple of years, which makes Mykonos a perfect buyer’s market.
As surprising as it might sound, 2014 and 2015 were good years for Mykonos, in spite of the turmoil in the rest of Greece during this period. There were obvious signs in 2015 that investors trusted Mykonos much more than they trusted the rest of Greece. This certainly has had a bearing on the residential property market situation here.
2016 should be a good year for real estate in Mykonos, without being spectacular. The decline in property prices is expected to stop, and we might even see a slight rebound. Certainly, the fact that Mykonos is such a perfect international property destination has a lot to do with the positive sentiment that can be so clearly seen here.

Who buys properties in Mykonos?
Now that Greece is slowing limping back to normalcy, one can expect to see more people getting interested in what Mykonos has to offer. The property market in Mykonos has always had its share of European buyers from Britain, Germany, Italy and France, as well as a number of American buyers with Greek origins.

What has changed slightly is that over the last few years, we have seen a number of wealthy individuals from the Middle East, especially from Egypt and Israel, buying beachfront villas in Mykonos hoping to escape the uncertainty in their countries.
For foreign home seekers, it is not just about buying a second home to spend their vacations in. Investors are very excited by the fact that Mykonos as such a strong rental market. This allows them to earn an excellent income from their Mykonos properties during the months when they don’t actually stay here.