THE BLESSED VOREAS OF THE CYCLADES
I have visited some of the Cyclades several times. More often, Tenos, Mykonos, Syros and Kythnos. Among my first impressions were those of the bare, powerful, rocky scenery, the astonishing white of the houses becoming whiter with closeness to the deep blue of the Aegean sea and the prevailing northerly winds or the “Meltemi” of the summer months. If the two first captivated me with their Doric beauty, the third (the winds) kept me intrigued for a long time until I came to delve into their secrets and be introduced to their beneficial power.
A SHOCKING EXPERIENCE
My first acquaintance with the Cyclades was in Andros the biggest Cyclade and the first you meet leaving the mainland. It was extremely windy and the journey to Chora (the principal town) was a scary experience since the road was up on the mountains and the fierce wind was rocking the car causing it to swerve all the time. I thought I would be tossed down the rugged cliffs and kept my fingers crossed, but surprisingly, the driver was literally exhilarated. In fact, he was singing all the way. I stayed in Chora a couple of days unable to discover the treasures of the place.

During the day I was annoyed by the strong wind messing my hair and pushing me back and during the night I was terrified of the wind howling through the shutters and the chimney. I decided to move on to Tenos, the next island lest the wind was milder. Invited by a friend, native to the island, I was accommodated in her house a typical Tenian whitewashed house with a small balcony to the north overlooking the mountain of Tsiknias. Entering the house, I was caught by the view and I ran to open the door to the balcony, get out and breath the fresh air.My dear God! It was a disaster. In seconds, doors banged, glasses shattered and I was left in the biggest embarrassment trying to close that door again, which would not. My friend laughed and her family looked very comfortable with that. “Don’t worry, it is the ‘Voreas’ (the northerly wind)” they said, smiling. They sounded proud of this wind. The next morning, the women of the house wore their beautiful head scarves and we all went to the port to have coffee in one of those quaint bistros on the water side. They socialized with friends, they laughed and went about their chat without even noticing the howling of Voreas. Me, I was always thinking about my miserable messy hair and my skirt which had to be guarded all the time so that it wouldn’t fly open. Poor me, I couldn’t enjoy anything. 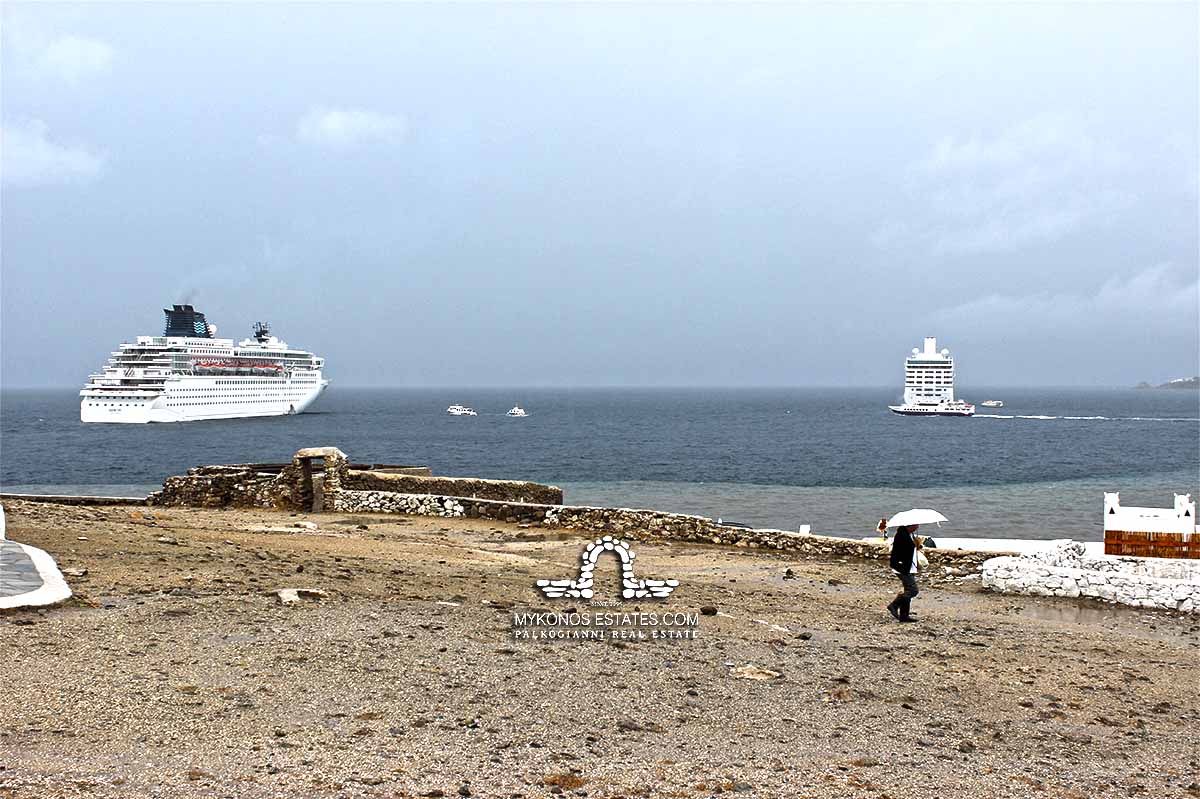 Two days later, the wind died down. The water was calm and translucent like fine organza. No wind! My hair in place! My skirt unthreatened. How happy I was. I thought it would be nice to move to Mykonos. It was only thirty minutes away. I could enjoy the beautiful beaches everybody talked about. My friends saw me to the boat to bid goodbye, but surprisingly, they were not smiling. Instead, they were grumpy and apprehensive complaining about the stillness of the air. “They’re crazy.”I thought.
I arrived in Mykonos port with open wings. I hailed a cab. The driver was quite sullen. He muttered strange words which sounded like cursing. Later, my landlady welcomed me, but she was sorry about the weather and warned me to avoid the sun. Down at the waterfront during lunch, I met some locals. They really had nothing else to talk about, but the weather which had turned to a mild southern Ostria by then. In fact, they used the worst language to describe it. They sounded angry and full of hatred. Everywhere I went, the local people were strangely uptight
Two days later, there was a full moon. For me it was great to be on such a beautiful island admiring the moon from the beach of Elia without the annoying wind. I have to admit though, that the heat was extreme causing me to sweat all the time. The day after the full moon, the wind set in again.The locals turned happier, relieved I dare say. As for me, it was time to go back home.

THE BLESSED VOREAS
It took me a long time and several visits to the island to understand how Voreas works.
First of all, Voreas is the epitome of the wisdom of Nature. Given that it starts during or just after very high temperatures, it becomes apparent that it appears for a reason; to temper the fierce summer heat and restore the balance. Without it, the heat would be unbearable and the sun would be scorching, especially in a bare, treeless environment such as that of the Cyclades. Secondly, the northerly wind offers great visibility and low or no humidity. That has a beneficial effect on fishermen, sailors, yachtsmen and others, but it also has a soothing effect on people’s physical and mental health. The clear horizon makes them optimistic and gives them the security that there is no imminent disaster ahead, such as storm, tornado or earthquake. The dry weather ameliorates their pains (arthritis is common in the islands) and helps them with respiratory problems. No wonder then, why my mykonian friend Stelios says: southern wind is sickness, Voreas is life.

Thirdly, northerly wind is fierce and powerful and it can form rough seas, but it is not dangerous because it is only on the surface. Unlikely, the south wind does not form a crest, but it digs the surface of the sea, causing deep gutters. The islanders are afraid to travel with seven gale southern winds, but they feel safe travelling on eight or nine gale of northern winds. They say Voreas is straightforward, but southerly wind is insidious. Last but not least, that particular northerly wind “Meltemi” is the wizard of the summer. It blows from north east,sets in in early afternoon, reaches five to seven beaufort at peak heat and dies out at sunset when it is not needed so much because the temperatures are lower.It perseveres during the night and follows the same pattern the next day. Therefore, you can organize your life or vacation accordingly. Travel in the morning to avoid rough sea,go swimming in south beaches for calmer water during the day feeling the coolness of the air, take your stroll at sunset,hungout in the narrow lanes of the town at night or spend your night inside bars.Alternatively, enjoy a good night’s sleep imagining that you listen to a powerful symphony.

ISN’T IT AMAZING! ISN’T IT A BLESSING!