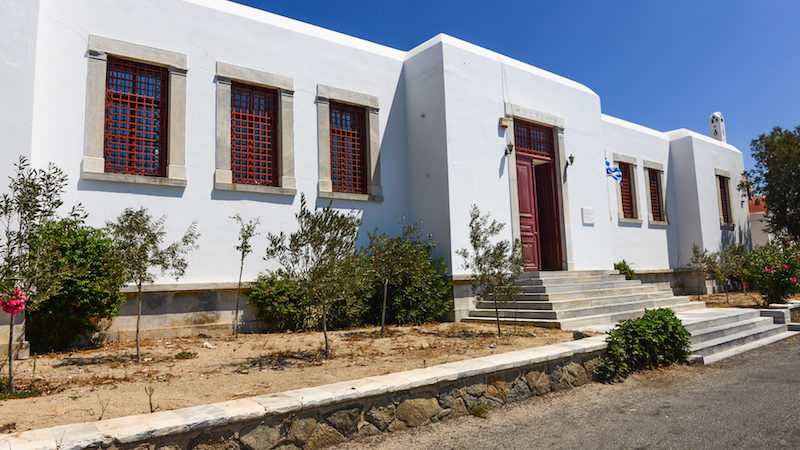 Everyone knows Mykonos for its world-famous parties and paradisiac beaches; after all, its slogan is not “Dance, drink, never sleep” for nothing. But the island has so much more to offer to both visitors and residents. Behind the expensive restaurants, luxurious hotels, and never-ending parties there are hidden gems for those who love history. The beauty of the Island of the Winds lies in its mix of the modern and the ancient, and you can catch a glimpse at the island’s rich history and culture by visiting any -or all- of the museums on the island.

Here are the museums you can’t not visit when in Mykonos:

The Archeological Museum of Mykonos was created to preserve what was found in the Purification Pit discovered in Rhenia in the 1800s. The Pit is dated back to 426-425 BC, and it was excavated in the latest years of the 19th century. Researchers found a significant number of archeological artifacts, especially Cycladic pottery, dating from the Geometric times until the 5th century BC.

The museum is located in the old port, overlooking the harbor. Besides its rich pottery collection, you will also find funerary urns, memorial statues, and columns dating from prehistoric times to the late Hellenistic period.

One of the most impressive artifacts exhibited in the museum is the Pithos of Mykonos. This urn, dated from the 670 BC, was discovered in the early 60s. It depicts scenes from the Trojan war, including the Achaean warriors and the world-renowned Trojan Horse.

The Folklore Museum is not merely a single building, it is an institution. It was founded in the late 50s, and it encompasses three museums in one: The Agricultural Museum, Castle House, and Lena’s House.

Castle House is located in Kastro, next to Panagia Paraportiani.

There, you will find six exhibition halls containing a rich collection of items representative of the Cycladic culture and history. These artifacts include Byzantine icons, typical ceramics, historic photographs, antique furniture, unique embroidered and hard-woven fabrics, an interesting collection of model boats, and other objects. The museum also serves as an archive for important manuscripts, photographs, and maps.

The House of Lena is a classic 19th-century Mykonian house that was donated to the Folklore Museum. It is named after its last resident, and it’s a great display of Mykonos’ rich social history. The inside of the house represents the typical arrangement of middle-class residences of that period.

The house has two bedrooms, a drawing room, a dovecote, and two courtyards and is decorated with antique furnishings, prints, tapestries, wood carvings, decorative plates and other artifacts that transport you back in time.

This open-air museum exhibits an extensive collection of traditional agricultural tools used before industrialization. The machinery in the exhibit includes a stone water tank, a dovecote, a wine press, a water wheel, and a village-style oven, among others. The Bonis Windmill is also part of the museum, and it’s located in the Ano Myloi area, which overlooks Mykonos Town’s Bay. This is a popular attraction among tourist because it was restored to work as it originally did and the area has one of the most magnificent views in the entire island.

This museum is located in the neighborhood of Tria Pigadia and right next to Lena’s House. It portrays a beautiful exhibition showcasing a chronological narration of the Cycladic naval history. The museum’s exhibits include scale models of various vessels from rowing and sailing boats and steam-powered ships that have navigated the Aegean from Prehistoric times to the present. You will also find other naval artifacts such as maps, and the original mechanism of the Armenisti Lighthouse.

The Aegean Maritime Museum has three living exhibits: The Armenistis Lighthouse, the Thalis O Milesios (an early 1900s cable-laying ship, and the Evangelistria (a sailing ship built in the mid-1900s).

The vessels are harbored at the Hellenic Navy Museum pier, and the Evangelistria can be boarded during the summer.

Delos Archaeological Museum was built in the early 1900s on Delos Archeological Site. What started as a small on-site exhibit has now nine halls filled with relicts of Aegean history. Six rooms are exclusively dedicated to displaying rare statues dug out from the archeological site. A couple of rooms display prehistoric-times pottery collections, and another room exhibits ancient everyday objects.

Among the many fascinating artifacts, you will find beautiful and detailed mosaics depicting fragments of Greek mythology and history. You will also find pieces of the Colossus of the Naxians, which stood 9 feet tall when it was erected and dates back to the 7th century BC.

Not technically in Mykonos, Delos Archeological Museum is located just a 20-minute boat ride on the Island of the same name. If you are visiting Delos, this museum is one of the mandatory stops on your tour of the island.

One of the main perks of Mykonos is that everything is relatively near, and these six museums are no exception. Enjoy a different day on the island visiting these marvelous places and let yourself be transported to a different period in time.

If you are looking to purchase a Mykonos Villa, be sure to contact Mykonos Estates.