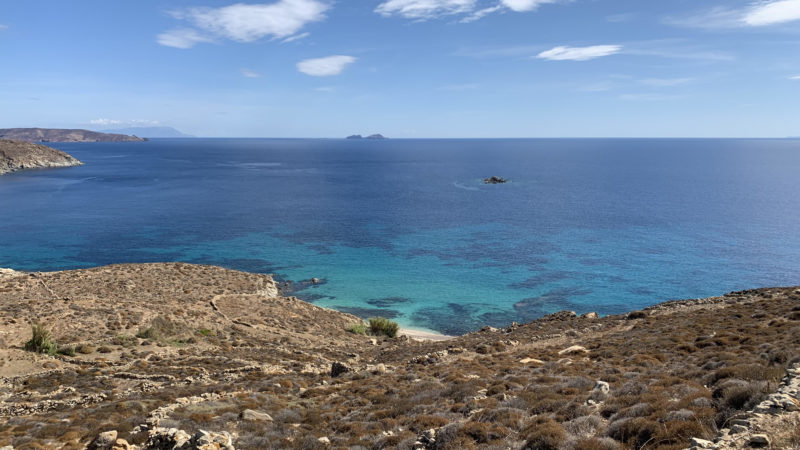 Why write an article about these three locations? What makes them so special? Are they linked in any way? The headline does not reveal much and there are many unique places in Mykonos; so what makes this part so special?

People who know Mykonos and have travelled there a few times, will without a doubt, have heard of Elia – a rather large and wide beach, located almost in the middle of the island’s southern coastline.

Not so many years ago, Elia had only a few mid-class hotels and villas; but over the last 5 years, it has truly transformed into an area filled with high-end properties of all kinds – 5-star luxury hotels, stunning villas, restaurants and bars. Despite its large size, it can get fairly crowded during July and August, as prices for a sun lounger and umbrella can easily be around EUR40. It is important to note, that while it can get very busy during peak months; it is nowhere near the noisiness and busyness of the party beaches – Paradise and Super Paradise, which are cluttered with beach clubs pumping out dance music 24/7.

The water at Elia beach is spectacular and even from afar, you can see the bottom of the sea to about a 10-meters’ depth. Walking along Mykonos’ longest sandy beach, especially during quieter months, such as May or October (beginning), can be truly refreshing and relaxing. 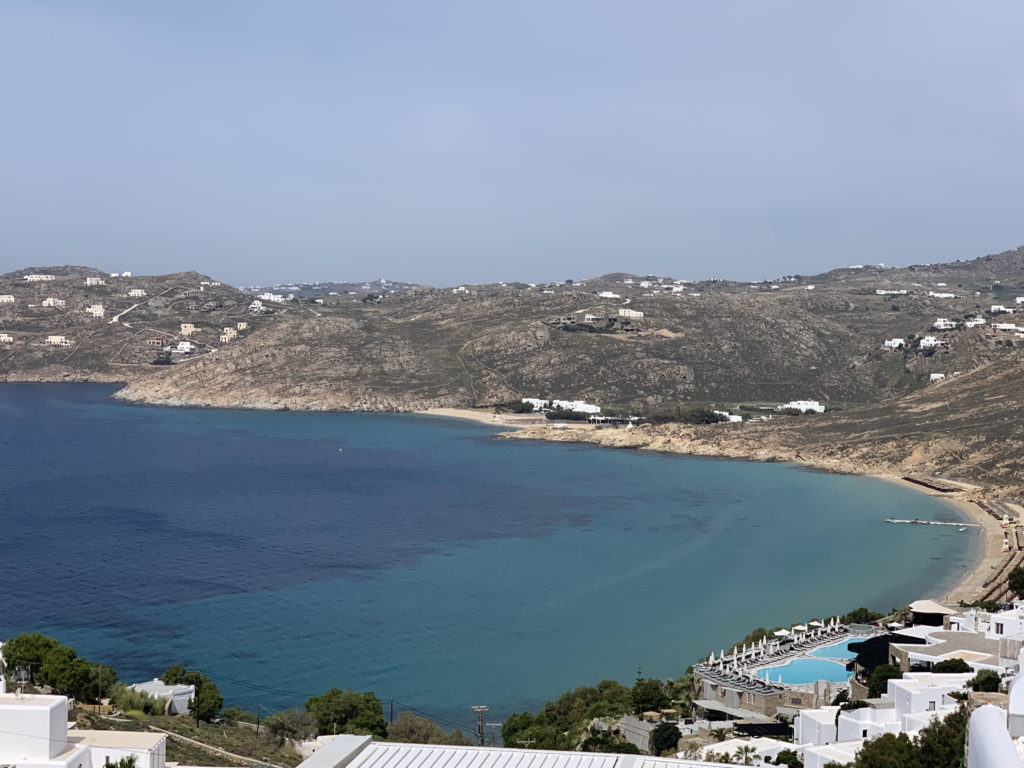 Another beach, a little further east along from Elia, is Kalo Livadi. Similar to Elia, it has grown massively in popularity, thanks to its long and stunning sandy beach. I am not sure whether it is clear from my picture, as it was taken in April on a cloudy day, but rest assured when I say that this beach has some of the most crystal-clear waters of any of the large beaches of Mykonos. The water here is also relatively shallow, extending to only about 2 to 3 meters depth, even if you swim 10-20 meters out into the sea, which is great for families. 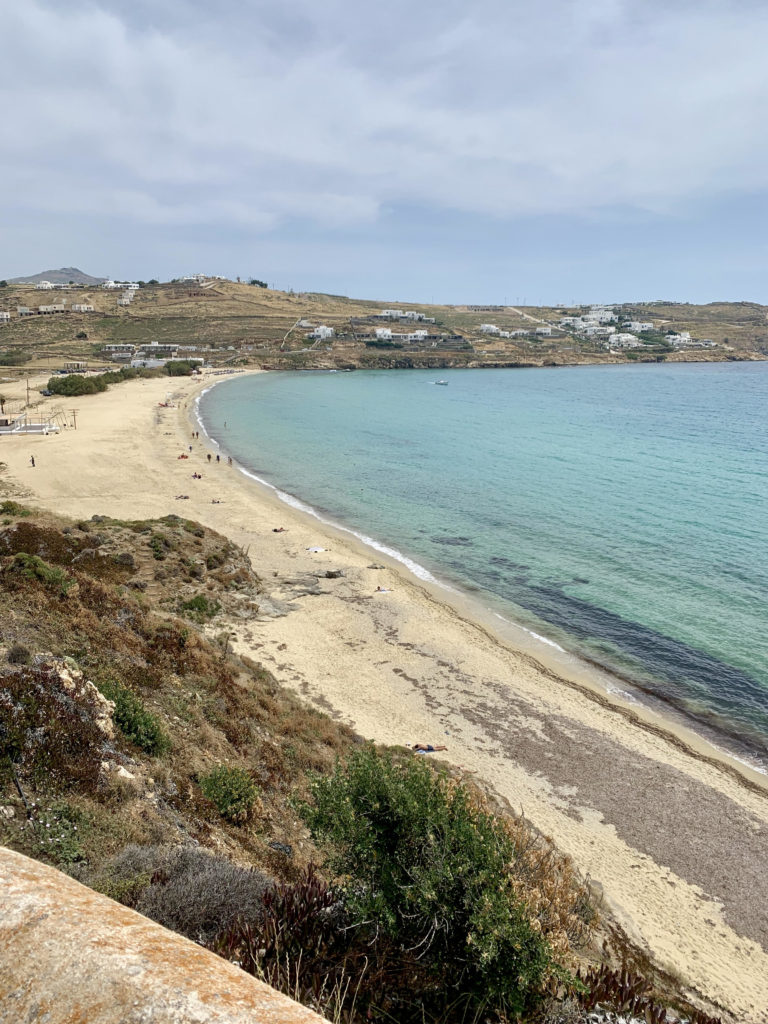 You can almost always find a free spot to place your towel somewhere on this beach. Of course, sun loungers and umbrellas can also be rented, if you wish to do so, for lower prices than at Elia.

There has been a few changes to Kalo Livadi over the last couple of years. Firstly, Lindsay Lohan had her beach club at Kalo Livadi in 2018 for one year, which certainly increased its global profile. Her beach club, however, only survived for the year and in 2019, it was replaced by the hugely popular and widely-known Blue Marlin Ibiza Mykonos beach club and restaurant.

Secondly, in 2019, Marriott has completed the first part of its Aegon Autograph Collection Hotel, which is in the very right-hand corner of Kalo Livadi beach when facing the sea. Unfortunately, promises to complete its beachfront section of the hotel for the peak season in 2019, heavily advertised on its official site, have not been fulfilled. Nonetheless, once fully completed, it will surely add a beautiful beachfront hotel complex to Kalo Livadi’s coastline.

Kalo Livadi, is also well known by the wealthier groups of people visiting Mykonos: on one of its hills behind the beach, you can find a popular helipad, where helicopters regularly land and take off during the summer season.

I assume that a lot of you have been reading so far, is because you really want to know about one place – Karapeti. A quick Google search will not tell you much about this beach; barely anything in comparison to its popular neighbour to the southwest – Elia – and its other well-known beach neighbour to the southeast – Kalo Livadi. Karapeti, is an absolutely magnificent beach which, unlike its neighbours, is covered with small and round stones, which makes it really comfortable to walk along, barefooted.

The positively frustrating thing about this stunning location is the fact that you cannot even find it when searching on Google maps. Somebody has to provide you with the coordinates, in order to pinpoint it on the map. Once located, you will realise that you cannot reach it with any vehicle over land, as there is a relatively steep hill covered in dry and stinging plants, without a road leading down to this beauty. Only a boat trip or a walk down the hill through the rugged fields will get you there (takes about 15 minutes down and 20 minutes up, depending on whether or not you are a good hiker).

The ‘positively’ in my previous oxymoron phrase ‘positively frustrating’, refers to the fact that it is exactly this difficulty in accessing Karapeti beach, that results in barely anyone being there, even during the peak months of July and August. It is an untouched strip of land with waters so clear and in mesmerising shades of blue, which just looking at it from high above and on the beach is strangely satisfying and meditative. 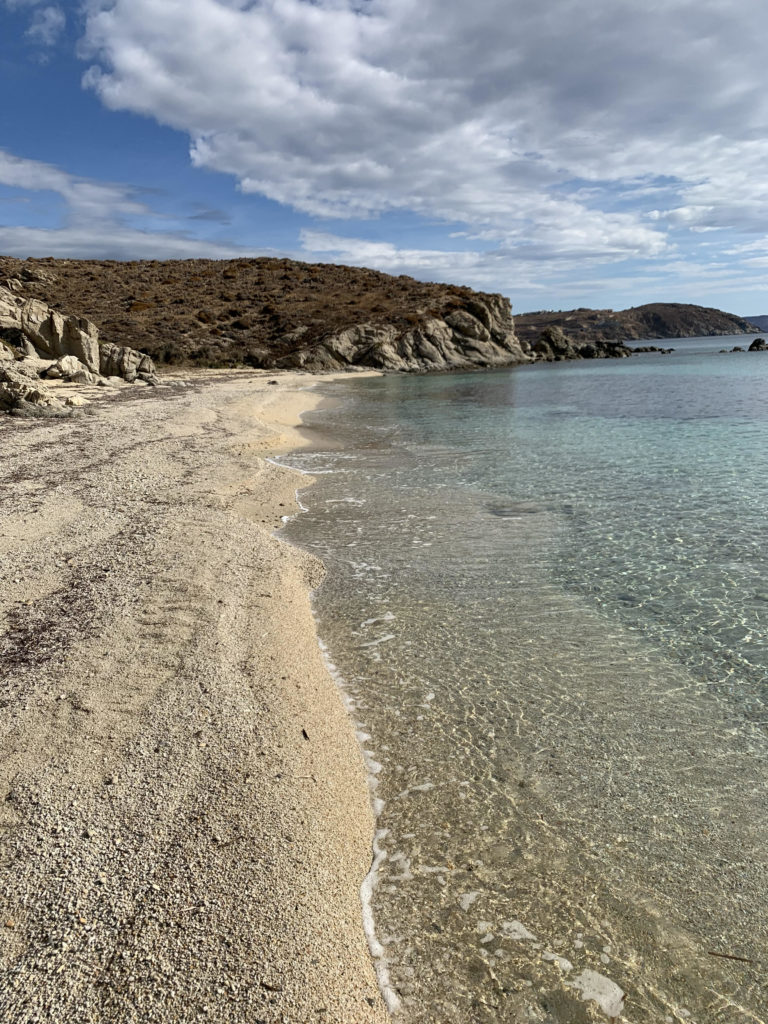 There is another aspect that makes this beach unique amongst the 36 or so beaches on Mykonos island (yes, that many if you know them all; several cannot be found on any map): it has a small piece of rocky land reaching into the sea on the very left-hand side of the beach (when facing the sea). It looks similar to the white rocky stone formations found everywhere on Milos island. The water around those rocks on Karapeti is crystal clear and only about 2 to 3 meters deep, so you can easily see down to the bottom from further up unless it is a very windy and/or rainy day. 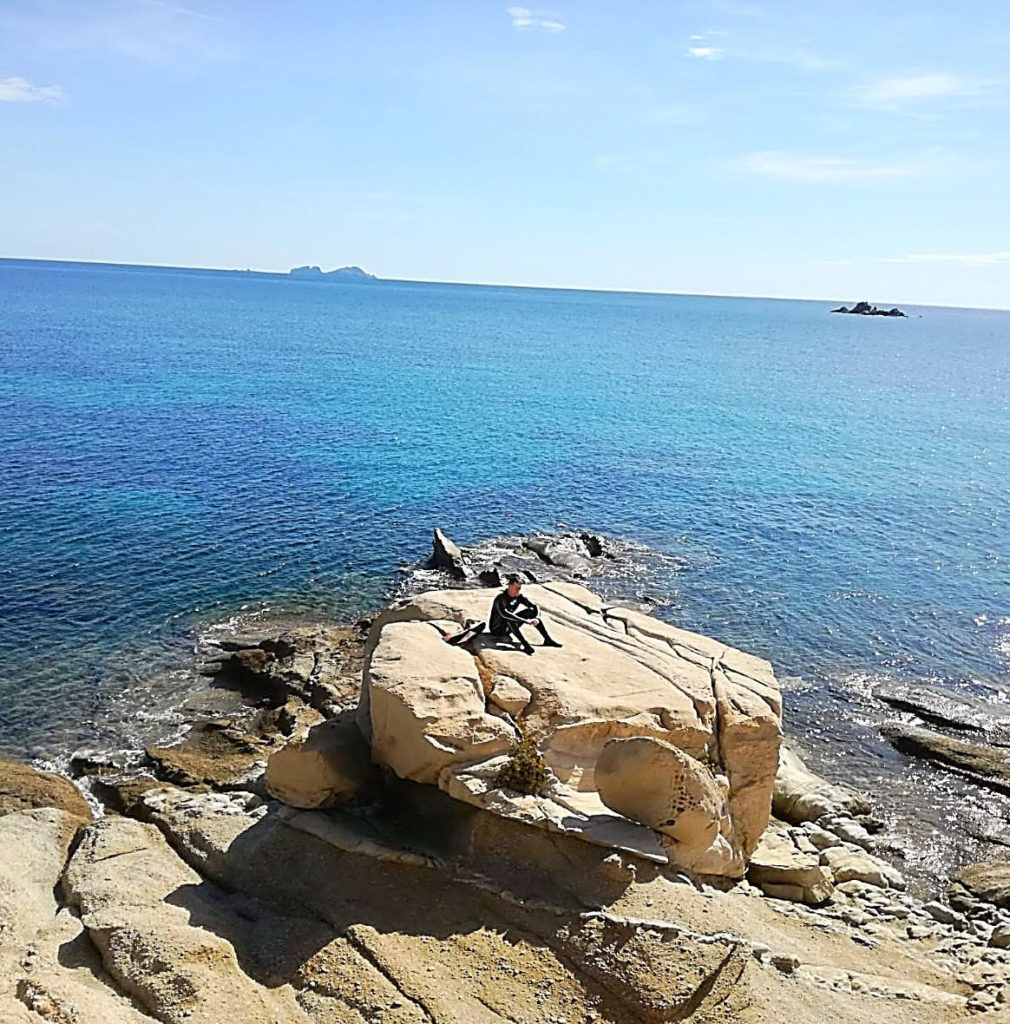 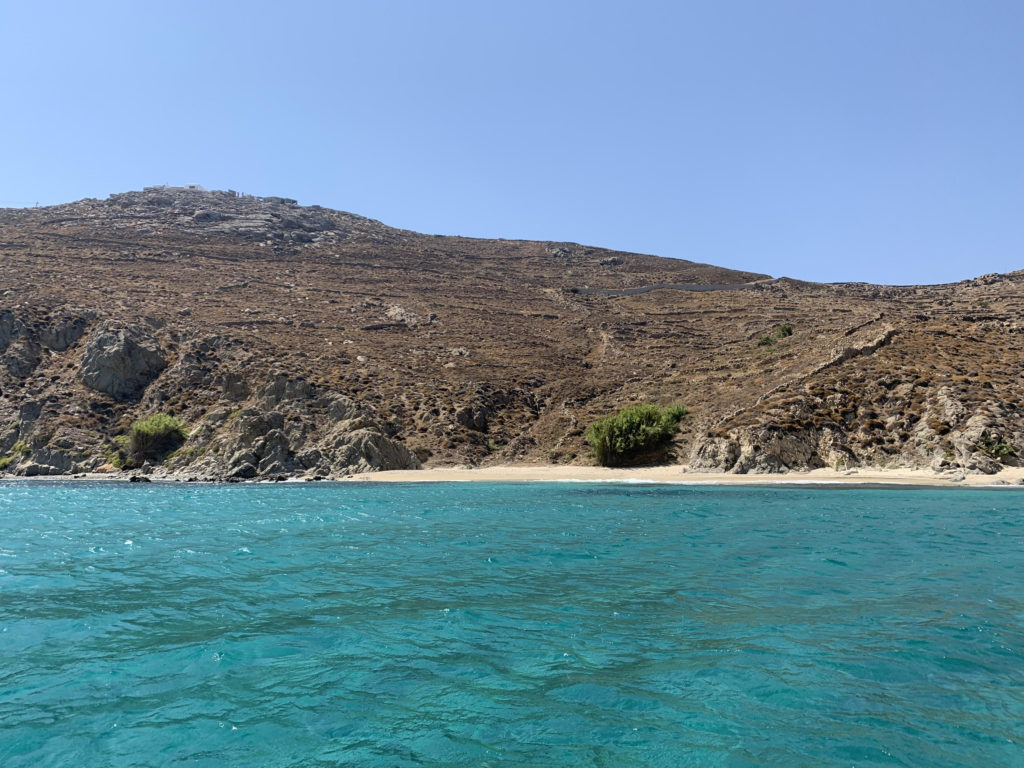 So far, Karapeti has remained untouched, but that may change over the next two years. ‘The Mykonos Project’, comprising two massive property complexes reaching down to Karapeti beach on both sides, has recently received the green light. When looking onto the beach, the left side will be covered by a selection of Greek-styled modern properties designed and managed by Four Seasons, while on the right-hand side, a Greek billionaire is planning a stunning collection of exquisite accommodation of all sizes. Both complexes will make use of the beauty of Karapeti beach. Let’s hope that they both do so in a smart way, respecting the environment and integrating with it smoothly and tastefully.

The area around Karapeti may not have been the most popular, in terms of renting and purchasing the property. This is expected to change dramatically over the next two years, as the development of the areas is about to kick off. You can still secure a nice piece of land, possibly even with some form of building structure on it, or an already-issued building permit, for a third of the price of other high-end areas, such as Agia Sofia, Aleomadra, Saint Johnor Ornos. Some examples of land/properties are shown in the pictures below. It may not look much, currently, but any of these examples could easily be transformed into stunning vacation homes for personal use or investment. 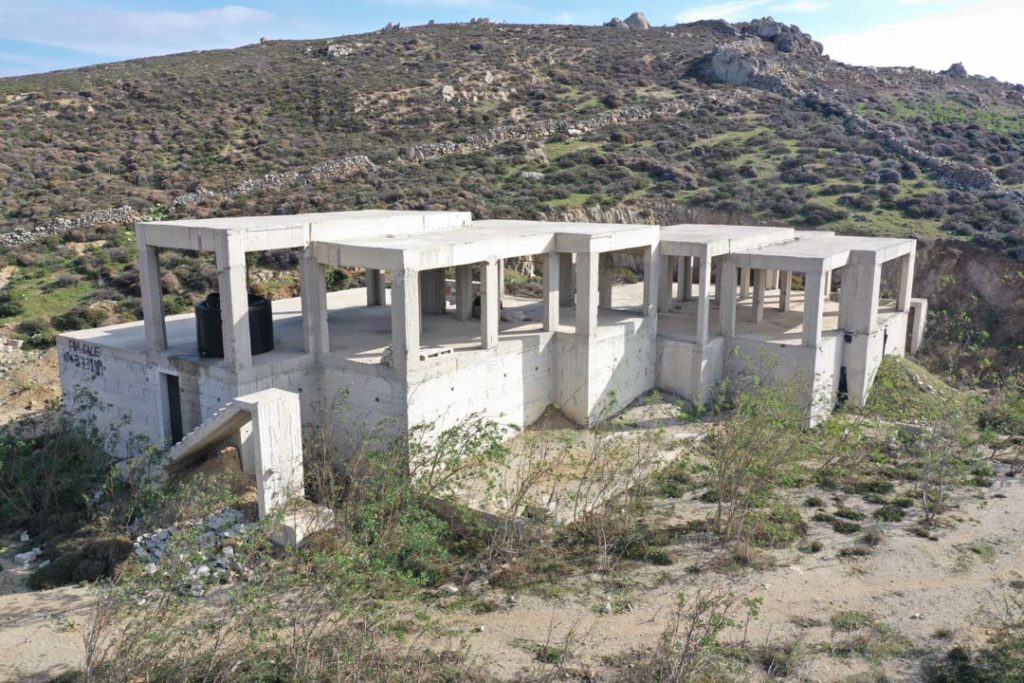 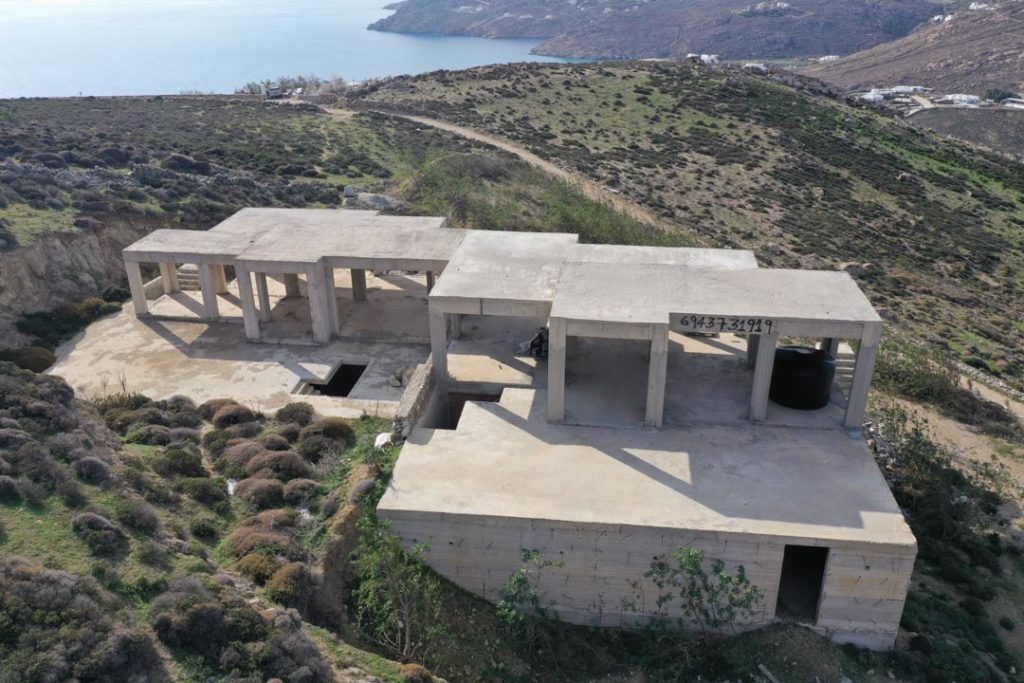 In the not-so-distant future, Elia, Karapeti and Kalo Livadi may grow even closer to each other, thanks to the new ‘Mykonos Project’ development; which will link the three locations with better infrastructure and a new choice of accommodation, restaurants and bars; allowing for easy access, even to the so-far-hidden gem that is Karapeti. Check out the untouched version for as long as it remains: it is absolutely worth the short boat trip or negotiating the stinging plants when hiking down the hill. Likewise, you can go and explore some stretches of land and discover the possibilities of building your own dream home, in a soon-to-become top spot of Mykonos.

For more information on new homes to rent or buy and land to purchase please explore Mykonos Estates wide range of properties.